World War II veterans, famed Calutron Girls and schoolchildren all shared a high school auditorium to celebrate the launch of the historic Manhattan Project National Historical Park in Oak Ridge, Tennessee.  The once Secret City is one of three national sites that collectively create the park, along with Los Alamos, New Mexico and Hanford, Washington. 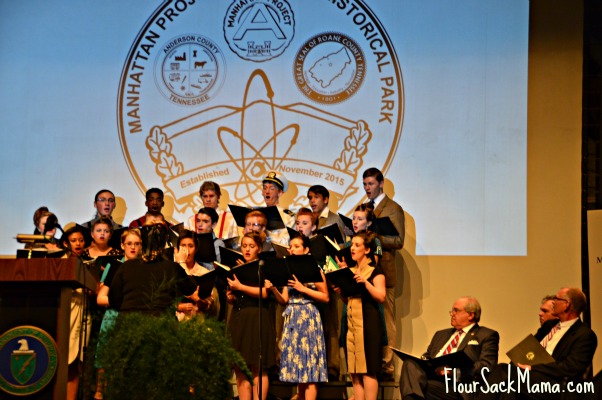 “Because of these veterans, we can celebrate today!” proclaimed Roane County Executive Ron Woody from the auditorium stage where visiting dignitaries awaited their turn to speak, and where high school chorale performers sang nostalgic Boogie Woogie Bugle Boy and other songs.

This park will not follow traditional boundaries, but instead winds throughout the original Secret City that was developed during World War II specifically to develop materials and conduct research necessary for the first atomic bomb.  Plans for making visitor areas more accessible and tourism-friendly are still in the works, as are budgetary plans, with the National Park Service and Department of Energy relying heavily on volunteers to expand services such as educational tours.  The park touts stories of the Dawn of the Atomic Age.

At the height of the federal work in Oak Ridge, as many as 75,000 people called it home.  The city is now just under 30,000 in population, already able to boast of the American Museum of Science and Energy and other art, theater and history centers as well as top-ranked public education.  AMSE, as well as the Oak Ridge Heritage ad Preservation Association, have a heritage of preserving local history.  The National Park Service aspires to help tell this unique story to the rest of the world, as a focus of the new cooperative effort between NPS and DOE, which currently runs the museum. 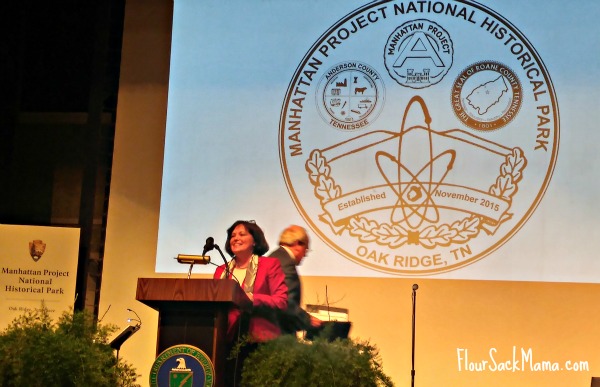 Associate Deputy Under Secretary Kimberly Rasar of US Dept. of Energy

East Tennessee native Kimberly Rasar was honored to speak at the event on behalf of the US Department of Energy, now serving as Associate Deputy Under Secretary of the organization.  She waxed nostalgic about having roots in the area, and of the historic mission of Oak Ridge that has evolved to make the area a notable global science and technology center.  “It is amazing the depth and breadth of what we do and it had its roots in the Manhattan Project,” Rasar explained.  She referred to historic energy sites as “national treasures.”

Visitors from the state capitol stressed that enhancing the ability to tell the Oak Ridge story should be a boon to tourism, already a $17.7 billion industry in Tennessee.  Commissioner Kevin Triplett from the Tennessee Department of Tourist Development said of the historic park mission, “It’s not just Tennessee history.  It’s national history.”  Three of the original Calutron Girls were present as special guests at the event.  They represented a large group of young women who learned to skillfully operate devices during the 1940s that separated tiny amounts of uranium needed for the Manhattan Project.

Barclay Tremble, Deputy Director of National Park Service Southeast Region, touched on the complexity of telling the story of helping build the world’s first atomic bomb.  The Manhattan Project is a source of pride for many whose families came to Oak Ridge to serve their country and created a community.  “It also challenges us to think about the consequences of war,” Tremble also noted about the NPS taking on an interpretive mission. 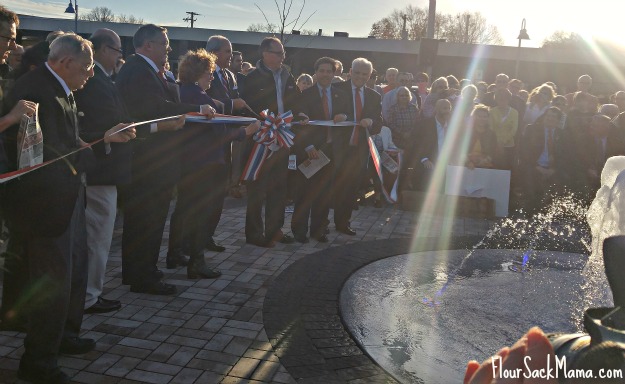 Park service representatives were on hand after the speeches to stamp postcards, brochures and national park passports with a new park seal.  Later, the crowed migrated to the original, and recently renovated, Jackson Square in Oak Ridge to replicate a historic photo by Manhattan Project photographer Ed Wescott.  In his 1940s photo, the crowd was holding up newspapers signaling the end of World War II.  The modern-day photo showed local residents and visitors holding up newspapers declaring “Park Opens!”  The official ribbon cutting happened shortly before the larger crowd photo.

Planning, design for more accessibility of visitor center areas and collaborative efforts between various agencies are still in the early stages.  Yet, the declaration of a new national park offers hope for expanding tourism to the East Tennessee area.