Taking the elevator to the top of the Knoxville’s landmark Sunsphere was the highlight of a downtown summer field trip for my family.  The girls marveled during the short ride up that we’d be climbing so high, then they scouted for different Knoxville landmarks through the golden glass on the observation floor.  I pointed out the red brick buildings of University of Tennessee campus, we saw the flowing Tennessee River to the south, and clouds obscured much of what could have been a better view of the Great Smoky Mountains on a clearer day. 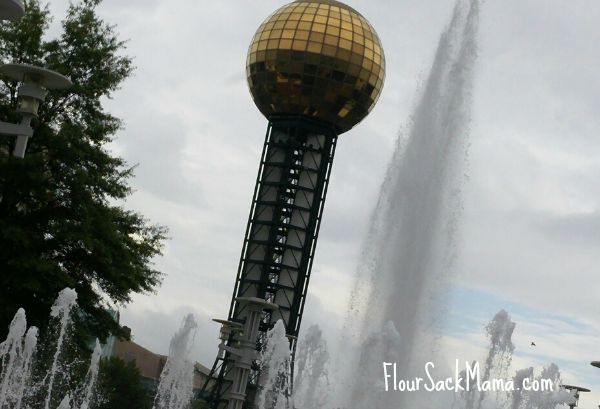 We noticed that photographic memorabilia decorates much of the Sunsphere’s public observation deck, hailing back to 1982 when this area hosted the International Energy Exposition.  One of the selected photos on the wall showcases coal miners with the saying, “Coal:  Energy Mainstay of the Future.”  On our way downtown that day, my oldest daughter asked what the Sunsphere was made of, (steel, golden-tinted glass) and exclaimed, “They ought to put solar panels on top of there!” She later added that suggestion to the interactive screen at the Visit Knoxville kiosk on the observation deck.  Surely she’s not the first school-aged kid to think of this? 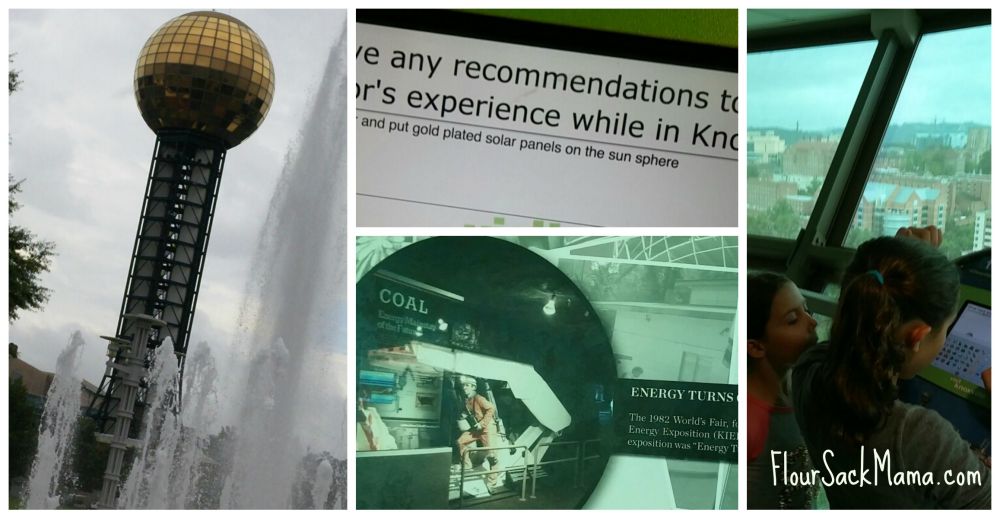 Even during the World’s Fair, people were already thinking of solar panels and other ways of harnessing renewable energy. In the assortment of countries and businesses represented, displays included a home of the future, photovoltaic panels, a windmill and references to nuclear power. However, on the silver Energy Express train that zipped through the park each day to synthesized music, one car panel clearly displayed, “Out of all the modes of energy, we think COAL is BEST!”

33 years after the World’s Fair, the nation’s largest public power provider is still headquartered in downtown Knoxville. Early this fall, this powerful New Deal organization that serves nine million people and dozens of influential public and private business entities in the Southeastern will be deciding which energy approach will work for the next 20 years.  The Tennessee Valley Authority Board’s decisions on the Integrated Resource Plan will help set a course for business development, regional stability and even our children’s health. Choices will be made about how closely to follow mandates set in the federal Clean Power Plan that calls for cleaning up the nation’s power plants, even closing some, to cut carbon pollution and stem the impending problems of climate change. Executives will be using terms like “least-cost method” or “cost-effective,” yet they’re being challenged to look at priorities beyond the financial bottom line.

Granted, TVA has been a leader in cleaning up power plants already; but as the Clean Power Plan indicates, fighting climate change requires everyone’s help.  As environmental scientists have shown, simply switching from one fossil fuel to another such as natural gas, amid concerns about modern hydraulic fracturing or fracking’s risks to health and environment, is not necessarily a cleaner energy answer. Unlike previous years’ TVA plans, this IRP seems to include a serious look at renewables. However, it remains to be seen whether curbing climate change, promoting clean air and water and considering public health will be a priority. Decisions about how seriously to invest in solar and wind, how seriously to take health and environment impacts, can either insure a healthier future for children in the Southeast or make their future exceedingly grim. At the end of the decision-making process, hopefully TVA will answer its moral obligations and deliver more than a shiny silver train that tells us fossil fuels are really best.

Here’s how you can get involved and connect soon with other concerned parents:

August 8 in Chattanooga: Come play or volunteer at the MCAF table at the Cooldown Chattanooga festival

August 21 in Knoxville: Read TVA’s IRP for yourself here, then attend the morning TVA Board meeting in Knoxville, where leaders will be considering the long-range plan and where citizens may sign up to speak during a public comment period.

August 22 in Memphis: Join the School of Public Health at the University of Memphis for an important panel discussion