Stay in-the-know by signing up for our free newsletter here!

It was a humid June evening when I parked near World’s Fair Park in downtown Knoxville, Tennessee and walked a couple of blocks to the historic 1982-era amphitheater.  I’d forgotten my water bottle, which made me grateful I’d only shown up in time for half of the ongoing fitness class.

I discovered the amphitheater stage covered in a patchwork of colorful yoga mats, with women busily jogging from station to station, doing tricep dips in front of the stage, running stairs and moving purposefully onto the sidewalks and lawns.

I tried jumping in to read instructions at each station, yet I still needed help.  The women volunteered that I could try the low, medium or high number of repetitions at each station.  Many were already halfway done, so I politely did a minimal number of reps, eventually lunging down a sidewalk, then trying to bear walk across rough, toasty concrete atop a pedestrian bridge and convincing myself that one pass would have to do. 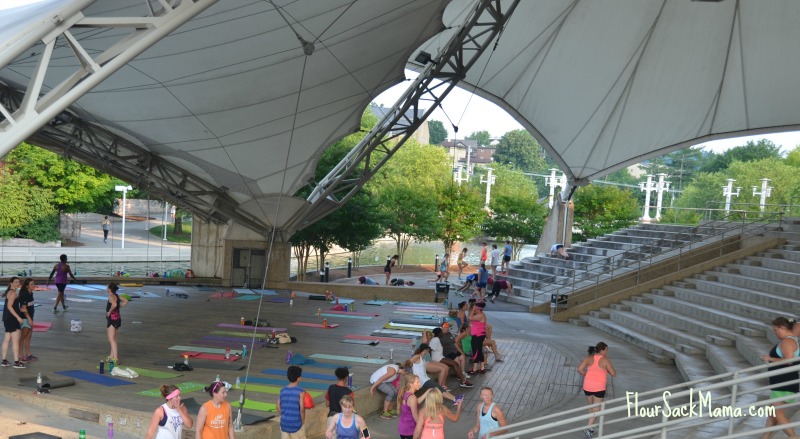 This feisty, sweat-soaked group call themselves the Knoxville Beauty Hunters, a nonprofit that’s been meeting several times a week in the Knoxville area for the past three years.  Women show up dozens at a time, led voluntarily by All-SEC Lady Vols soccer player who organized the group in 2012.

Beauty Hunters is a place where every woman fits in, whether she wears designer digs or an old t-shirt, whatever shape, size or age.  It’s less about the body and booty aspect of fitness and instead focuses on the whole person.  Founder Sarah Van Sickle is very clear, “Our focus isn’t just to change women’s bodies, it’s to change their minds and to create confidence, inner strength, a mentality inside that will supercede physical appearance.”

Van Sickle greets everyone personally, checks on each station, and motivates with a positive tone — sassy, but never crude. 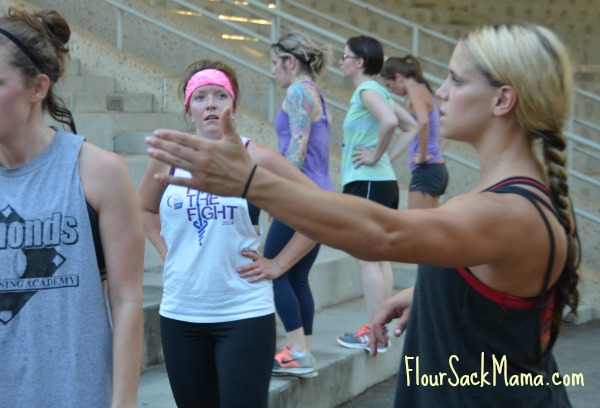 Melissa Moonilal shared what she liked specifically about their leader, “She’s just really nonjudgmental. I don’t feel embarrassed if I have to do modifications.”

Van Sickle feels like close friends with every woman who shows up for this part-bootcamp, part-inspirational gathering.  She insists on taking the group photo with me in it, refusing to get in the picture herself.  She reminds all the participants that they are strong and beautiful.

Beauty Hunters was founded when the UT kinesiology graduate decided to create a program to get at least 30 to 60 women involved in this unique fitness program.  That original program reached 300 local women, and now Beauty Hunters reaches thousands of people online. Van Sickle works elsewhere in East Tennessee as a personal trainer, working on obtaining her certification by the National Strength & Conditioning Association.

Founding this group impressed the judges of an Under Armour What’s Beautiful campaign that made Van Sickle an athletic spokesperson.  Van Sickle has an impressive Instagram following and is notable for her advanced bodyweight strength training.  You may have seen her recently in a promotion for National Fitness Center, where she serves as a #teamNFC fitness ambassador.

While she certainly looks the part of a pro-athlete or trainer, Van Sickle humbly spends more time talking about self esteem and overcoming her own demons than about creating the perfect body.  On her Beauty Hunters site, she shares openly about her past struggle with bulimia and overcoming insecurities.

Every Beauty Hunter who shows up to sweat can relate in some way.  Lisa Guyton told me the first two times she took part in the boot camp it drove her to tears, more of an emotional than purely physical struggle.  Guyton says the combination of a weight loss support group and Beauty Hunters helped her lose 90 pounds.  While she’s gained some back and still struggling to reach her personal goals, Guyton is happy that at age 46 she’s better managing health concerns like diabetes and high blood pressure through an active lifestyle.

“I knew that God was just calling me to do this with my life,” shared Van Sickle. She admits committing to building a non-profit program is not easy and the organization accepts donations to keep running and potentially expanding.  She insists that the group meet several times a week and be the beginning of a positive movement for women who are #RedefiningBeauty.  “This is my passion!”

While the Flour Sack Mama blog has a business relationship with NFC, this is not a sponsored post.