How do you get the opportunity to hear the President of the United States speak in person? Sometimes, it’s just a matter of being in the right place at the right time.  “I really just wanted to be in the same room as the President.  I thought that would be pretty cool!” shared Anne M. Scott about her recent attendance at a presidential speech in Knoxville, Tennessee. 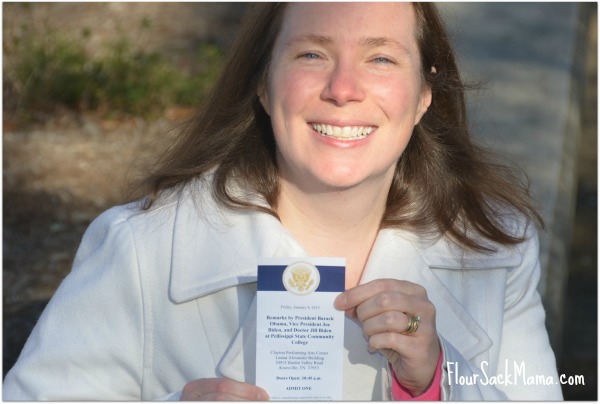 Scott’s name was drawn in a raffle of students and faculty at Pellissippi State Community College to be one of the select few who would personally hear President Barack Obama announce his plan to make two years of community college free for all Americans. The wife and mother who’d been assisting at her church as temporary choir director had just signed up for community college classes the previous month, in order to earn a music degree.  This would be in addition to the bachelor’s degree in chemistry and master’s degrees in education that led to her main career in corporate training.

While Scott is beginning classes at PSCC ahead of many peers, she could appreciate the idea of making college less costly for others.  She shared that she personally still pays $60 each month toward the student loan for her bachelor’s degree earned more than a decade earlier.

The President’s announcement comes ahead of his State of the Union speech, emphasizing the theme of education along with job growth and home ownership.  His proposed program would have three-quarters of the cost of a student’s first two years of college covered with federal money, while the states would pick up the rest of the cost.  This is not unlike current Pell Grant programs for low-income students, but the new program would be offered regardless of income.  Obama’s notable traveling companion on his visit, US Senator Lamar Alexander, former Tennessee governor and former US Secretary of Education, has publicly said individual states should pick up the cost of such a program just like his home state has with Tennessee Promise.  Alexander is also calling for streamlining the Pell Grant application process, which Obama acknowledged in his speech could use some tweaking.

The President’s proposal is termed America’s College Promise.  It aims to fill a need by 2020 of 30% of jobs requiring at least an associate’s degree.  You can find more details of the plan here.  The setting he chose for the announcement is a two-year college well-known for turning out highly skilled workers for technical fields. 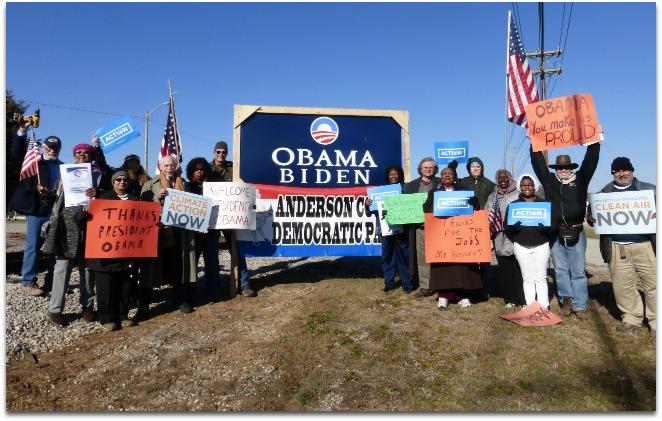 Along the way from the popular PSCC in Knoxville to an Anderson County manufacturing center where he would promote public-private partnerships and job growth, the President had the opportunity to see warm welcomes from East Tennesseans eager to catch a glimpse of his motorcade.  This included Organizing for Action volunteers, local Democratic organizers and others.

Long-time OFA volunteer Joan Nelson, one of many who waited in the cold for a glimpse of the motorcade, praised local law enforcement for their diligent work to make the visit happen. “I am proud of the citizens of Knox and Anderson Counties for their warm welcome of the President, Vice President and Dr. Biden.  I am also very impressed with the police and sheriff’s departments who did a lot of work in preparation and did a great job of protecting the President while he was here.”

While jobs and education topped the President’s agenda in East Tennessee, many are mindful of his ability to influence policies like energy, environment and health.  Moms Clean Air Force Tennessee organizer Lindsay Pace said if given the chance, “I would ask the President that when he makes decisions to remember our children and future generations. Not only in the here and now, but in the long view. To preserve and protect their futures, as well as the land they will inherit.”  MCAF is voicing concern in Tennessee and elsewhere for reducing lung-clogging ground-level smog as well as overall carbon emissions.  Even the beautiful East Tennessee area ranks relatively low for clean air quality. More than half of the state’s energy still comes from burning coal at power plants like the one on Melton Hill Lake that the Presidential motorcade passed by.

The President’s visit seemed to be a win-win for residents and politicians eager to celebrate some hopeful news.  Scott said she was impressed to see so many leading home-state Republicans and Democrats welcoming the President together.  President Obama apparently recorded his weekly address on the PSCC campus as well, another honor for the educational institution.

Only time will tell if additional federal funding will become available for America’s College Promise.  The idea is getting a positive response so far from many Tennesseans, including Scott, who is thinking ahead to paying not only her tuition, but that for her two growing children. “We’ve gotten to the point that you need higher education just to make a living.”

How are you #CleanCouponing in 2015?
Fresh Start Twitter Party Tonight with The Green Divas