My youngest daughter became very ill the day we visited Emily Lane’s beautiful corner of small-town Arkansas.  I wrote about this experience later at Moms Clean Air Force.  We had been on a tour of the rural area turned industrial park, and we shared the concerns residents had that led to them testing their own air despite assurances that everything was fine. Arkansas residents, like people in many parts of the country these days, are still struggling with the conflicts between needs for clean air, clean water and good health — and the relentless “progress” America has been making in extracting oil and natural gas with unprecedented technology that includes mysterious chemical cocktails forced into layers of shale rock.

Emily Lane currently serves at director at ArkansasFracking.org, a citizens group determined to raise awareness and protect local people, lands and livelihoods.  In light of the recent decision for New York state to ban fracking for the sake of public health and conservation, Lane writes this guest post sharing her perspective from Arkansas. 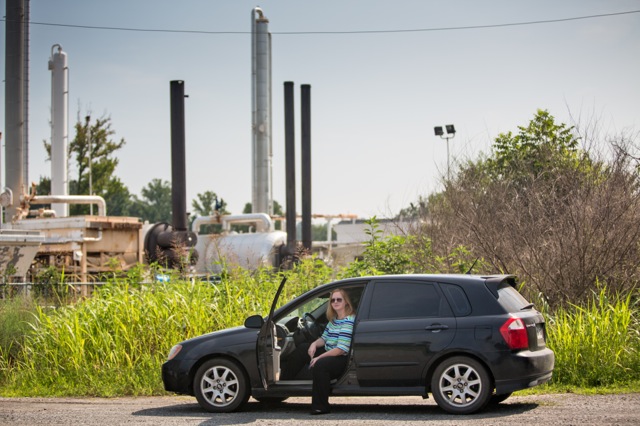 Will Arkansas Heed the Warning Signs on Fracking?

Last December, New York Governor Andrew Cuomo announced a state-wide prohibition on fracking—an unconventional process of collecting oil and gas from deep rock formations via high-pressured injection of chemicals, sand, and water.  As someone who is deeply concerned about the impacts of natural gas development in my own community—central Arkansas—I felt great relief and excitement for the people of New York and my colleagues there who had been working for years toward this decision.  I also felt sadness and frustration that Arkansas continues to ignore the multitude of data on the hazards of oil and gas activities that got the attention of New York legislators.

Let us take a quick look at aggregate data from approximately 400 peer-reviewed studies on the impacts of unconventional gas development.  Of the 400 studies, 96% of all papers on health indicate risks and adverse health outcomes; 95% of all original research studies on air quality indicate elevated concentrations of air pollutants; 72% of original research studies on water quality indicate contamination.  It is also important to note that there has been a recent explosion in the number of peer-reviewed publications, with approximately 73% of all peer-reviewed papers published in the past 24 months, which averages to about one paper per day over a 2-year period.  So, the science is becoming sound more and more each day, and it is playing the same sad song.

For those of us on the frontline, it is easy to see—to smell, to hear, to feel, to taste—contamination.  Symptoms in proximity to gas development in Arkansas—alone—would frighten even the most stoic among us.  Squirrels shedding tails.  Deer developing tumors.  Livestock and pets dying, quickly and mysteriously, or suffering a long and painful death.  The same goes for the people.  Miscarriage.  Birth defects.  Cancer clusters.  Asthma.  Nosebleeds and nausea.  Rashes and skin irritation.  Memory loss.  Hair loss.  Loss of sense of time.  Loss of peace of mind.  So much loss it cannot be accounted for, even by those losing it, and especially by those (in our state) who are not even counting it.  We can do much better by our people.

For many years, members of my community have experienced health problems (some quite severe) that seem to be linked to chemical emissions from natural gas sites.  For the past two years, I have been working alongside affected community members here and in other states to measure air emissions from these sites.  Together, our organization, Arkansasfracking.org, and 11 groups in six states collected 76 air samples from a variety of phases of oil and gas development.  The results of our research were released in October 2014 in the prestigious journal Environmental Health, and in a report titled Warning Signs.   The results were startling; in some cases, toxic emissions were measured at hundreds of times higher than safe levels.  In Arkansas, we saw elevated levels of formaldehyde—a suspected human carcinogen that can affect almost every type of tissue in the human body.  Exposure to elevated levels of formaldehyde can cause ear, nose, and throat irritation, reproductive problems, spontaneous abortion, and birth defects—among other things.

Now people in our communities who have been feeling effects no longer think they are going crazy.  As filmmaker and environmental activist, Josh Fox, said after hearing of the ban in New York, “Science told them today…that they’re not only sane, but their voices are on the side of justice and change.”  Indeed, many long-time residents of Arkansas and affected areas across the country have been ostracized in their own community, in their church, at their workplace, and at school.  They are laughed at, picked on, and discriminated against; all the while suffering sickness and other ill effects.  So, I am honored to have participated in this community based research that helped to shed light on what is really happening to our people.  I was proud that this research, along with numerous other peer-reviewed environmental and health studies, were cited by Governor Cuomo and New York state legislators as playing an important role in his decision to ban fracking.

However, as triumphant as the ban is to the people of New York, it does not solve all of New York’s problems.  The state still has several active compressor stations that help to transport gas from other states.  Compressor stations, which run constantly as opposed to active fracking or drilling sites, can produce large amounts of formaldehyde—the same nasty stuff that was found in samples from compressor stations in Arkansas.  So the New York ban is not perfect, but it is a good start in protecting public health from toxic emissions and holding the oil and gas industry accountable for its actions.

So I wonder what it will take for Arkansas to bring a precautionary approach to fracking and gas development.  How many more studies showing adverse risk and effects to air, water, and health do we need to start paying attention to the health and safety of our people?  Do we wait for a gas well to explode near Greer’s Ferry Lake, the drinking water supply for over 100,000 residents of Arkansas?  Do we wait for most of our children to have asthma?  Do we wait for another large earthquake or for the economic bust to set in?  What are we waiting for?  Can current and future investment in this industry offset the cost to human health and dignity?  What are we really sacrificing?  What price must we be paid to offset our health and the health of our children and grandchildren?  We must look to—and really listen to—the sound of science and the voices in the community who are brave enough to speak, and we must heed the warning that they bring, lest we add to the growing statistic of sickness, disease, unrest, and injustice.

You can reach guest post contributor Emily Lane at ArkansasFracking.org,