Oregon residents still stand a chance at getting a historic food labeling policy that will no longer keep them in the dark like most of the population.  The Oregon Secretary of State’s office has told Flour Sack Mama that a recount is the likely scenario for State Ballot Measure 92, which would require labeling of many genetically engineered foods.  Currently, most processed foods in the United States contain corn, soy or a few other crops modified in a laboratory to either create their own pesticide or to withstand unprecedented amounts of pesticide applications. This, while medical and science experts have expressed grave concerns about pesticides and human health.  These ingredients are not always listed as simply corn or soy, either; so consumers are not being notified at the point of sale. 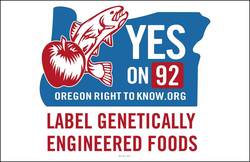 “We are currently within the margin of a recount,” explained Communications Director Tony Green at the Oregon Secretary of State’s office.  Green told us late Friday afternoon, November 21, that the count (reflected here in the unofficial election results) is around 1,500 and well within the margin required for a recount.  As of late in the afternoon, the yes votes were less than a percentage point behind the no votes.  Certification of this number may happen as late as December 4th, and then the recount process would begin.

The recount process will be slow by design.  Recounts are done by hand instead of computer.  There will be independent monitors.  Green said, “The public needs to have faith that the process reflects what they voted for.”

Right to Know spokesman Sandeep Kaushik explained that Oregon is just one step toward more food transparency for consumers everywhere. “With the count continuing to tighten we are optimistic that when the recount is complete Measure 92 will prevail, but we want to be clear about one thing: regardless of the final outcome of the mandatory recount, the labeling issue is not going away. This movement continues to grow and build support across this state and around the country, and that growth will continue. Those of us who support labeling and backed Measure 92 see this as an effort that will get stronger and stronger until we reach the day when every American is provided the information they need to make informed decisions about the food they eat and feed their families.”

On the federal level, there is also a move happening in Washington to deny states’ rights to decide on issues like this historic food labeling measure.  More on this here from the Center for Food Safety.

The Flour Sack Mama blog will keep you updated on developments in Oregon’s right-to-know food vote.