Do you ever get excited about seeing a special aunt or creative friend for a get-together because you know she always brings the most delectable food dish? Maybe you’ll be gathering together with her next week for Thanksgiving.  That’s the way we feel about members of the Pollan family pulling up to the virtual table with everyone who joins in for Thursday’s #CleanCouponing Holiday Food Twitter party! 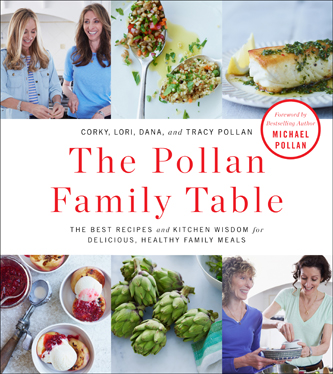 If you care at all about real food, chances are you’ve been influenced by author Michael Pollan’s work.  This cookbook is by all the brilliant women who influenced him at home when he was growing up.  Central to this is his mother, Corky Pollan, who has led a distinguished career in food and style writing for the New York magazine, New York Times and more!  Pollan’s three daughters — Tracy, Dana and Lori — were involved in authoring the brand new cookbook titled Pollan Family Table.

I’m excited to hear more about these sisters’ motivation for crafting the cookbook together with their mother!  I’m wondering which of their recipes I’ll need to try out this Thanksgiving.  I’m also curious how much influence their mother must have had on everyone’s interest in food.  I wonder if these mothers with children now of their own have faced the same challenges the rest of us have in getting our kids to eat their vegetables?

Enter here for a chance to win a copy of the cookbook, which we’ll draw for on the night of the Twitter party!

When we gather on Twitter from 8 to 9 pm Eastern with hashtag #CleanCouponing, let’s talk turkey and more!  In addition to our special cookbook authors, we’re hosting nonprofit guest Center for Food Safety, which offers essential resources for understanding where our food is coming from and some questions we might want to ask when shopping for holiday meals. Come on over to ask your food and farming questions!  What one thing could each of us try this Thanksgiving or later in the holiday season to improve on the typical American approach to food?  Is it possible to eat more local, more organic, to find non-GMO food choices?  Let’s explore that and encourage one another!

Here at the Flour Sack Mama and Clean Couponing blogs, we’re excited to feature a dozen diverse panelists at this online feast, who have festive food ideas to share as well as tips on being more mindful of this season’s food picks.  Please RSVP below and tell all your friends!

Here are some suggested Tweets you could use to spread the word: