Put a dozen people in a room together, and chances are they’ll find something in common. Put dozens and dozens together in a Twitter chat, and odds are, many have either had cancer, lost a loved one to cancer or realize they’ve already been unwittingly exposed to cancer causing substances.  The upside to this rather gloomy club is that people are finally realizing we have the power to make everyday choices and larger policy decisions that could have a really positive effect on health in the long run — maybe even help curb the unacceptable loss of a half million precious lives each year to cancer. 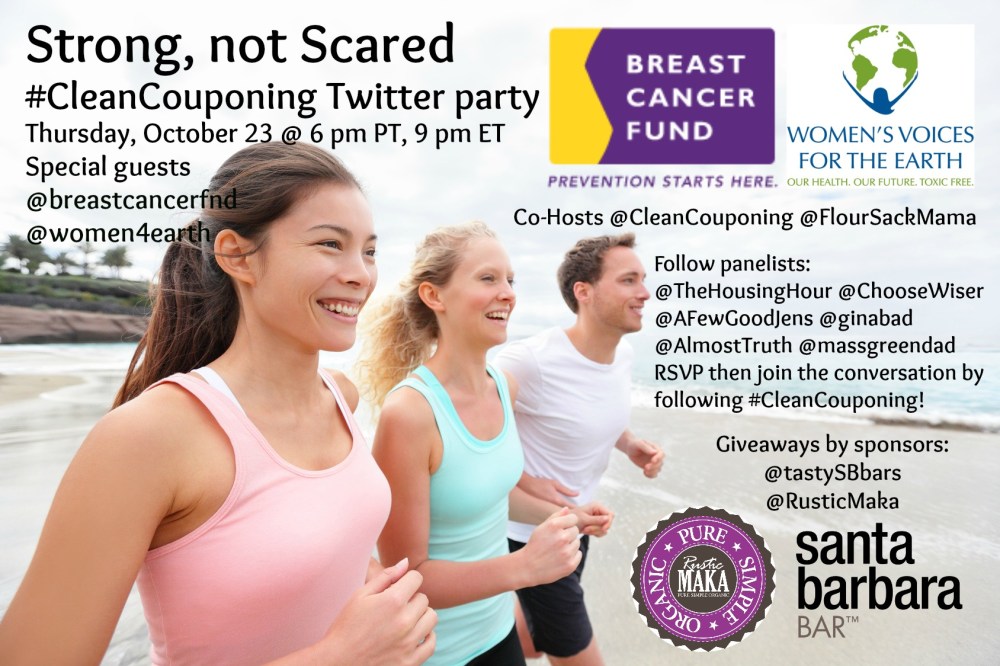 Because advocacy powerhouses like the Breast Cancer Fund and Women’s Voices for the Earth have so much science-based information to share with us, they were the stars of the Strong, not Scared Twitter party that included cancer survivor and author Kristi Marsh of Choose Wiser and several bloggers and radio personalities.  Brenna Burke of Almost All the Truth explained the pinkwashing problem succinctly in her blog post yesterday.  Women and men, moms and dads, nonprofits and small businesses, all gathered to get beyond the haze of pinkwashing, be Strong, not Scared and share #CleanCouponing ideas for picking safer products, reading ingredient labels and more.

Here’s some of what you missed:

We’re honored that nonprofits @Women4Earth & @breastcancerfnd could join us for this special Strong, not Scared #CleanCouponing event!

We aim to transform how society thinks about & uses chemicals and radiation, in an effort to #prevent #breastcancer. RT! #CleanCouponing — Breast Cancer Fund (@breastcancerfnd) October 24, 2014

So happy to be part of this rock star hour! #CleanCouponing — Women’s Voices Earth (@women4earth) October 24, 2014

Wow! Reading the event page amazed how much this overlaps with the #NewPuberty chat I am co-hosting on 11/4 #education #CleanCouponing

This was my #mamavation article on nearly all the toxins I could find that can be in cosmetics. http://t.co/C52Z448avG #cleancouponing

If you don’t want to miss our Novembeer 20th Twitter party, be sure to sign up for our newsletter here so we can remind you.

2 Responses to What You Missed at Strong, not Scared #CleanCouponing Twitter Party