America’s food fights are a joke.  They’ve become fodder for late-night television talk show host Jimmy Kimmel, whose viral YouTube video already has millions of viewers laughing at the ignorance of people who have no idea what GMOs are or why they’re avoiding them.  Not only does Kimmel’s bit not give much explanation about genetically modified organisms, he misses the point entirely that GMOs are all about pesticides:  more pesticides on our food, in the soil, in the water and air, even detected in babies’ cord blood.  Here’s a link to that video that would have us think anyone concerned about GMOs is either an angry foodie, a hippy, an elitist or someone otherwise out of touch.

“The GMO issue is the pesticide issue,” explained Gary Hirshberg.  The organic dairy king doesn’t have as many one liners as late night’s Kimmel. But, Hirshberg can get a big crowd reaction without needing applause signs.  The Stonyfield Organic founder quotes statistics and cites medical studies, spending much of his time spreading consumer awareness about GMO concerns for people and the planet. 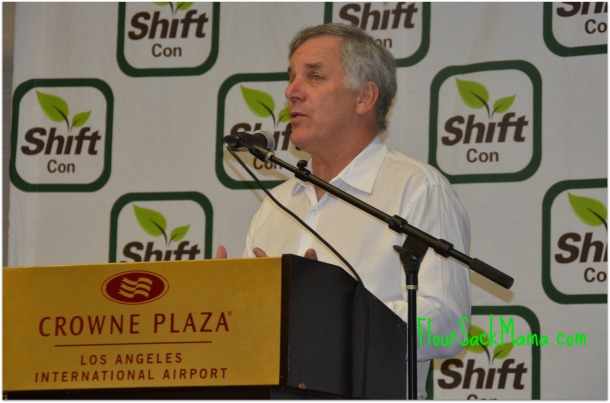 “The data is in, right?  You know what’s going on,” Hirshberg told a crowd of bloggers at the #ShiftCon social media conference in Los Angeles.  “There is an absolute link between pesticides and autism.  We’ve got one in 85 kids autistic and these numbers are going up.  It was one in 200 ten years ago.  You know the numbers with breast cancer, etc, etc.”

It’s the etc, etc that has most concerned parents worn out, concerned that for all we don’t know about GMOs and what their patent holders tell us not to worry about, we do know more of them mean more toxic pesticides in our children’s environment.  Most recently, the Environmental Protection Agency is expected to approve an unprecedented duo called Enlist, by Dow, that would mix glyphosate (the stuff the US Geological Survey already found in our rain water and rivers) together with 2, 4-D, a main ingredient in toxic Agent Orange defoliant during the Vietnam War.  The agricultural aim is to design crops in the laboratory to withstand pesticide spraying, while superweeds evolve in response to the chemical plant killers.

More than 100,000 people have signed a petition pleading with President Obama to overturn any EPA approval of this herbicide combo for GMO corn and soybeans.  Hundreds of thousands have already signed related petitions asking the EPA to deny Enlist Duo a permit.  The Environmental Working Group has mapped hundreds of US schools within the 200 feet potential drift distance of a corn or soybean field, which could expose schoolchildren to the toxic chemicals. 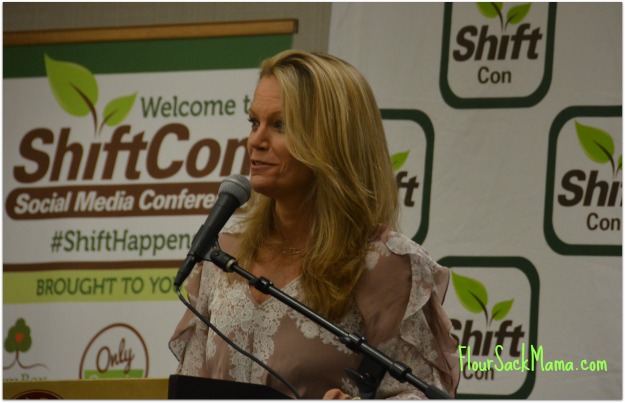 “I realize that this is one of the greatest civil rights issues of our time,” shared Robyn O’Brien to the #ShiftCon influencers.  The mother who’s given Ted talks and written a best seller understands the power of social media influence, reminding each attendee that they can educate the people around them no matter the size of their following. O’Brien didn’t buy the idea that there was anything wrong with the food system, until she had to deal with a critical food allergy in one of her children.  She’s an industry analyst, now tailoring her information to help other moms just like her.

Like O’Brien, Lisa Stokke of Food Democracy Now has wants to reassure everyday people that they are right to question what’s in their food.  Both women encourage people to be mindful of their source of information.  There’s a lot of misinformation surrounding GMOs, such as that only GMO farming can feed the world.  “Don’t listen to the lies.  Don’t listen to the hype.  If it doesn’t seem right, it probably is not,” said Stokke.  Colorado and Oregon voters can soon vote on whether they want a GMO label required on food they buy.

Do some preppy and crunchy people outside the Jimmy Kimmel Live show have no idea what GMOs are?  Probably so.  Maybe next time Kimmel could just ask who wants a side of pesticides and potential health hazards with dinner.  Or he could invite a Hirshberg or O’Brien or just about any #ShiftCon network blogger to give a clear explanation of what’s at stake.

It’s okay, late night talk shows can laugh about GMOs and America’s confusion about them.  But many, many moms understand this toxic pesticide connection is too serious to ignore.  So we won’t stop talking.  “We are changing the conversation,” O’Brien went on to say, “The marketplace is listening and responding.”