Being mindful and prayerful about the People’s Climate March in New York City this weekend was a focus of the Greater Knoxville Climate Vigil hosted last weekend by Tennessee Interfaith Power and Light.  Church pastors and people of various faiths gathered at Knoxville, Tennessee’s downtown Alex Haley Heritage Square for the event.  They called this Southern gathering “a spiritual response to climate change.” 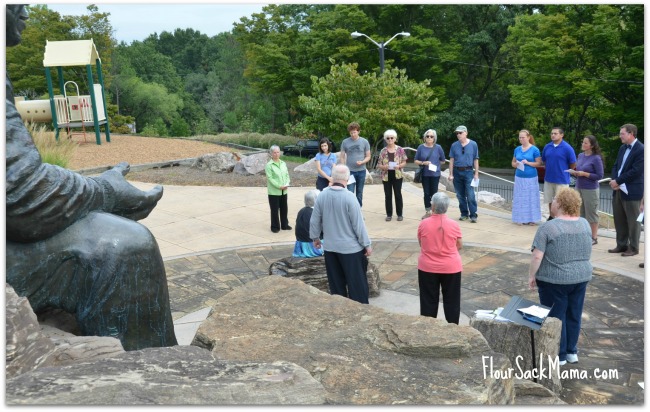 St. Mark’s Methodist Church pastor, the Reverend Dave Graybeal, offered a reflection.  Traditional songs like Simple Gifts were sung.  Retired Episcopal Pastor, the Reverend Kay Reynolds preached, “God created it all.  How do we respond?” in a gentle nudge to take Creation care seriously as people of faith. The local Jewish community and those of other faiths also attended the event.

They pray and sing in Knoxville area congregations concerned about climate change.  But they also act, taking everyday steps like promoting recycling and more visible steps like some individuals planning to attend the People’s Climate March.  One Methodist parishioner planning to attend the march is Jennifer Alldredge at St. Mark’s Methodist Church.  She leads the Creation Care team at her church, finding ways to live out the Christian faith by caring for one another and God’s Creation. Alldredge said, “we worked hand in hand with our missions team this year.”

Sierra Club member John Waterman, who took part in the vigil, said he plans on attending the march as well, and is helping Tennessee send students to the march via this volunteer fund.  IPL volunteer Louise Gorenflo, who organized the local vigil, wrote about the moral implications of doing nothing about climate change. “Our children and their children will bear the heaviest consequences of our behavior.  Climate change will have different impacts around the world and among different populations.  Through our inaction, we are imposing the costs of our behavior on our children and upon the most vulnerable.” Members of Knoxville’s faith community are part of a nationwide movement that views climate change as a cause with a faith-based call to action.

Deep & Diverse Faith Moves Many to New York for People’s Climate March
Saturdays in the Garden: Our Ugly Corn Harvest