*The following is a post sponsored by Allison PR in cooperation with the Mamavation community.

Could shoppers and store clerks be unwittingly exposing themselves to hormone disrupting Bisphenol A via cash register receipts?  Could an overstuffed wallet be even messier than you realize?  Another independent analysis of receipts from several grocery stores shows more than one in four still contains BPA.  This, after major businesses have followed the trend away from BPA in thermal receipt paper.  It’s been years now since the Environmental Working Group previously alerted the public to this problem. 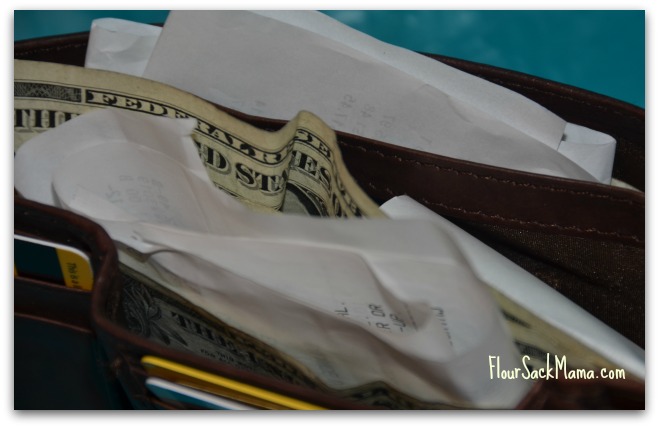 BPA is the ubiquitous chemical in the US marketplace with volumes of research showing it can harm humans, especially causing problems during fetal development and setting up children for major health problems later in life.  BPA mimics estrogen, tricking the human body.  One of the reasons it hasn’t been entirely banned is that it was developed as a seemingly harmless building block for making things and it remains popular with manufacturers. Endocrinology experts now realize BPA acts at very low levels like a harmful drug.  Government studies have detected BPA in humans and in public waterways.  Yet, the Food and Drug Administration still calls BPA “safe.”

Five different grocery store chains were found in this recent analysis to use receipt paper in at least some of their stores with BPA levels above sample reporting limits: Winn Dixie, Kroger, Martin’s, Ahold and Safeway. This, according to laboratory work by Ensource Corporation, which was commissioned by the Walter James law firm.

The BPA levels reported at concentrations above 1,000 mg/kg, were from 15 Winn Dixie stores in Florida, Georgia and Alabama, some now renamed as Bi-Lo stores. Ensource reports it examined receipts collected between September 26, 2013 and February 6, 2014. When we asked Winn Dixie for a response, we were told it had made a change to cash register receipts in early 2014. Corporate Communications Specialist Julianna Roberts for Bi-Lo Holdings said,  “In our research, we learned that in January 2014, Bi-Lo Holdings, parent company of Winn-Dixie, changed receipt paper suppliers for reasons unrelated to BPA. We are pleased to report that the new supplier has assured us that their product is BPA free.”  In answer to our follow-up question, the Ensource lab said the last Winn Dixie sample taken was on December 17 of 2013.

The Kroger corporation had previously said it phased out BPA from receipts at the end of 2011. Yet this report indicated receipts from four Southern Kroger stores still carried traces of BPA.

A spokesperson for both Ahold and Martin’s, Tracy Powelski, responded about their family of stores, “We’ve been assured by our supplier that our receipt tape is BPA free.”

Flour Sack Mama has contacted all five companies reported to have BPA in their receipts, asking for their responses.  Samples in the Ensource study were checked only for the presence of BPA but not for any replacement chemicals.

Researchers in other instances have detected a replacement for BPA, called BPS, in other cash register receipts.  This cousin to BPA raises similar health concerns about endocrine disruption. So, even “BPA-free” is not an assurance that the receipt you place in your wallet is safe to handle.  US law currently does not require manufacturers to prove that BPA, BPS or any other chemicals are safe for long-term human health before putting them into the marketplace. Consumer advocates have made little progress in changing this.  In the case of the endocrine disrupting qualities being discovered in chemicals, the newest science shows extremely low doses may be quietly doing the most harm to humans and the environment over time.  It’s not clear what would be a “safe” dose of BPA or if there is such a thing.

How can you protect yourself from BPA or other endocrine disrupting replacements in cash register receipts?

*This has been a post sponsored by Allison PR in cooperation with the Mamavation community.

(This post is not intended to offer any professional advice in the health, medical, environmental, business, legal or other fields.)