The prospect of catastrophic climate change is a distinctly moral issue for thousands of people of faith who are headed to New York City for the People’s Climate March.  Scripture studies, worship and prayer will be a distinct part of the historic gathering set for September 21st. 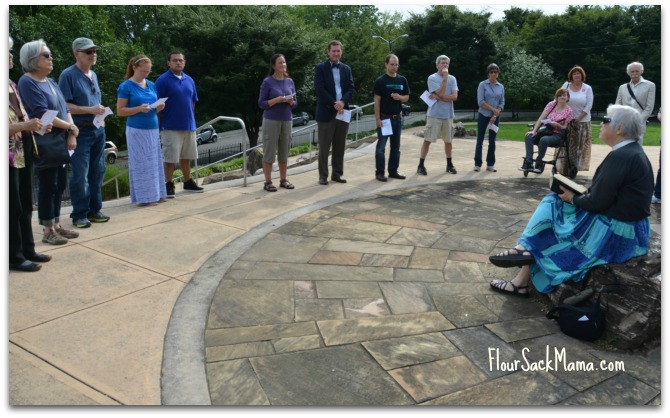 What would Jesus Christ think about marching through the streets along with some who might not be Christians, who might be considered liberal environmental activists?  “He’d probably lead the march,” answered Dan Terpstra, an active member of the Presbyterian Church USA from Oak Ridge, Tennessee.  “I can’t help but believe that he wouldn’t have much sympathy for those whose business plan is destroying the climate.  His sympathy would rest with those – the least of these – who will be most impacted by that destruction.”  Terpstra and his college-age son Ben, plan on making the climate march a family trip.

The daughter of a Baptist pastor says she’s remembering her parents’ teachings to love God will all her heart, soul, strength and mind.  That’s why University of Maryland graduate student Rachel Loraine Lamb feels compelled to care for others by also caring for God’s creation.  “Climate change is one of the most significant threats to both marginalize people (those least able to adapt) as well as to the environment  itself. Therefore, I feel that if I truly love God and desire to love what God loves, then I should do all I can to fight for life, health and justice.”

Grandmother Joy Jamison is headed to the march from her comfortable home in Louisville, Kentucky.  She already writes letters to the editor, volunteers at St. Paul’s United Methodist Church, gives educational talks in her community and prays for those in need.  But from her perspective, it’s not enough without taking part in the collective effort of the People’s Climate March.  “I think about my grandkids.  I think, ‘what is the world going to be like for them?’”  Her youngest grandchild is just three and a half years old and Jamison and her husband recently moved back to Kentucky from Colorado to spend more time with extended family.  Jamison decided that at age 74, she’s called to march in New York just as she did last year in Washington.

Major world religions have creation stories in common that include some reference to environmental stewardship.  Jewish Rabbi  Moti Rieber pointed out the passage from Genesis 2:15 in the Torah that explains God put man in the garden of Eden in order to tend it.  He also noted that a scripture passage in Deuteronomy chapter 20 cautions against destroying an enemy’s fruit trees, even in a time of conflict.  This passage is a basis for the concept of bal tashchit which means “do not destroy” what God has established.

Rieber explained, “Throughout history, Jewish tradition has been concerned for the lives of people and the availability of resources that enable human life.  Values such as bal tashchit and pikuach nefesh (which references to the obligation to preserve human life) remind us that the world is not for us to use up, but is for us to continue to maintain for the benefit of ourselves, our children and future generations.”  Rieber leads the Lawrence Jewish Community Congregation and serves as coordinator of Kansas Interfaith Power & Light.  The husband and father of three plans on heading to the People’s Climate March from his home in Overland Park.

Interfaith Power & Light helps various congregations whose teachings might differ in some areas to come together over the climate issue because of its compelling moral pull.  You can see at this IPL resources page that several denominations already have public statements on climate change.

Sharing Rabbi Rieber’s sentiments about creation care are many Christians who‘ve joined together as Young Evangelicals for Climate Action.  Western Theological Seminary student Kyle Meyaard-Schaap plans on attending the September march as one of the Young Evangelicals group, as does Lamb.  Mayaard-Schaap explains how his relationship with Jesus Christ calls him to act on climate.  “To me, to be an evangelical is to believe deeply in the good news.  That good news is that Jesus Christ is reconciling all things to himself, including his entire creation.”  He’s concerned about injustice for the most vulnerable people who have already suffered the most from climate destruction.  While studying to become a pastor, Meyaard-Schaap works in the creation care office of the Christian Reformed Church.

Mayaard-Schaap says he looks forward to having conversations with people of different belief systems at the climate march.  He wants to dispel some myths.  Prayer will be an important part of the event.  “It’s my wish that our presence at the march can be a witness to the hope that we have in Christ.”

The mistaken idea that faith and science are incompatible is one that evangelical Christian and climate scientist Katharine Hayhoe has been dispelling.  When asked why climate matters from a Christian perspective, she answered, “Caring about climate is entirely compatible with our core values: caring for others in this world who don’t have the resources we do and who will be most harmed by the impact we are having on our planet and the places where we live and grow our food.”  Hayhoe and her husband, Pastor Andrew Farley, co-authored the book A Climate for Change:  Global Warming Facts for Faith-Based Decisions.  Hayhoe serves as director of the Climate Science Center at Texas Tech University.  While her schedule won’t allow her to travel to this event, she has been a climate influencer in the faith community and beyond.

For those who can’t make it to New York for the march, several regional groups will hold prayer vigils and educational events leading up to the event.  One such prayer vigil was held last weekend in Knoxville, Tennessee, hosted by IPL with participation by various denominations.  Even those taking part nationally realize the one day is symbolic, while ongoing efforts to influence government and business leaders are most important.

Terpstra, a university researcher, was instrumental in influencing his PCUSA denomination to begin a serious study of whether a faith group should divest institutional money from the fossil fuel industry.  GreenFaith is another faith-based organization leading the way for fossil fuel divestment and alternatives.  IPL  offers conservation programs for congregations, and YECA does outreach throughout the country.  Many denominations have their own creation care departments that include resources you can use at the community level.

For all the ways they differ, people of faith believe, in the most basic sense, that God calls them to care for their neighbors.  The Jewish value of pikuach nefesh is not just about valuing human life in the immediate term, but caring for humanity over the long-term, even caring for future generations.  As Jamison shared because she feels the urgency to curb climate change now, “I hope it doesn’t take some dreadful disaster for others to get the picture.”  Terpstra confessed, “For too long, we have known about the implications of climate change without acting on it.  The People’s Climate March provides an opportunity for a visible concrete display of a conviction to act.  Christians and people of faith bring the moral and ethical weight of their faith to the issue that goes beyond a secular or humanistic perspective.  Not only is it a bad idea to wreck the climate, but for people of faith, it’s also WRONG to do so!”

An abbreviated version of this article originally ran at the website for Moms Clean Air Force.