You turn on the faucet in your kitchen every day expecting clean water for your family to drink.  We’ve long known that keeping watersheds clean is key to protecting our access to safe drinking water, and the public pays for utilities to provide this.  Sometimes droughts even call for water restrictions in parts of the United States as civic leaders must prioritize the water we have.  Did you know that millions upon millions of gallons of public water are taken for use now in modern hydraulic fracturing or fracking for natural gas?  The industry standard seems to be at least 5 million gallons of water per well, with this multiplied many times over. 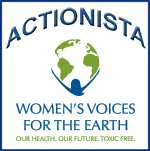 Delaware Riverkeeper Maya van Rossum shared some astounding facts about fracking and water when she spoke recently to Actionistas with Women’s Voices for the Earth. In this webinar, van Rossum explained that the Delaware River is critical for clean water supplies in four states: New York, New Jersey, Pennsylvania and Delaware.  She leads the nonprofit group that advocates for its protection.

Van Rossum explained that concerns about fracking in the Delaware River area include the large quantities of fresh water used in this industrial process as well as protection of watersheds in the long term.  Since drilling for natural gas now can stretch as far as two miles underground, clean water advocates are concerned about any weaknesses in well casings that might allow leaks.  When the millions of gallons of water are used in the fracturing process, they include a percentage of toxic chemicals to aid in the getting gases released from shale rock.  Plus, fracking can stir up naturally occurring radioactive elements from deep underground.  Proper storage and disposal of used fracking fluid becomes another problem.

You can learn more about the Delaware Riverkeeper at their website.

If you don’t want to miss another Women’s Voices for the Earth webinar about a wide range of women’s health and related environmental topics, go here to learn about becoming a WVE Actionista.

If concerned women won’t speak up for clean water, who will?