Rocks dug into my left knee, not once, but twice, during my tomboyish days growing up on the family farm.  The worst gash involved tiny bits of gravel that my mother picked from the bloodied pit in my leg. Neither gash impressed my parents enough to drive me to the doctor for stitches.  I was the youngest of four kids, so I suppose they’d seen worse.  My twice scarred knee has been an instant conversation starter with my kids, both of them shocked that I never received medical attention for those injuries. We’ve thankfully had only one tiny, nasty gash between the two of them.  Yes, there were stitches; of course, no scar. 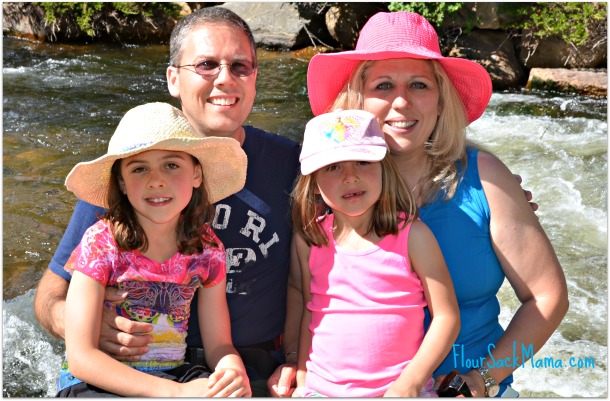 We want to protect our babies, no matter their size, from any wounds and scarring that might befall them.  Yet, mere survival is the challenge for many families today, whether homeless in a war-torn land, shaken from the gunfire that killed teenager Michael Brown, or battling pediatric cancer.  Safe is a relative term, a subjective concept in a scary, unpredictable world.  In a perfect world, every child would grow up in a caring home with someone to kiss the boo boos and make sure she gets stitches if she needs them.  In this imperfect world where we all live, most of us can only spare the attention for acute problems like violence and injuries.  Perhaps, like my mother, we can only put a bandage on the wound and tell our crying child to carry on.

If not for organizations like Healthy Child Healthy World, we wouldn’t pay attention to the chronic problems of air and water pollution, toxic pesticides on our food, even hazardous chemicals in our everyday products.  Plenty of people are aware that a more peaceful world would be a safer place for all our children.  Fewer see the connection between preserving our natural environment and keeping the planet livable enough for our children to thrive.  Fewer yet realize science reveals that in our polluted environment exists a cruel connection between tiny exposures to toxic chemicals and potentially life-threatening diseases like diabetes, Parkinson’s and cancer later in life.

When award-winning journalist and 350.org co-founder Bill McKibben sat down to explain the urgency of climate change to me, I asked him why every family should be concerned.  He answered,

“Because this is the one issue that there’s ever been that’s going to affect every family and every generation of every family for thousands of years to some.  The changes we’re making right now, what we do in the next ten years, will help determine the geological history of the planet.  We can already see the danger.  The Arctic essentially melted last summer.  So we’re making changes on a huge scale and we’ve just got to stop.”

At the time, 350.org had just begun the now growing movement of institutional divestment of fossil fuels that science links to climate change.  Climate change is not just about far way places like the Arctic. It’s about extremes of flood or drought where you live, the acidity of the oceans you visit on vacation, an increase in tropical diseases inching into North America and about today’s air quality.

One of the energy fixes modern treasure hunters dig for is natural gas, trapped deep in pockets of shale.  They’ve developed methods of extracting the gas, but not necessarily ways of operating with long-term safety in mind.  Citizens aren’t always notified when hydraulic fracturing with a mysterious cocktail of chemicals changes the landscape in their neighborhoods.  They’re testing their own air and wondering if the local water will be safe to drink.  Scientists are finding cause for concern about hormone disrupting properties of fracking chemicals and hormone disrupting evidence in water near fracking sites.  Why does the way we extract energy matter to public health?  When I visited her laboratory, University of Missouri School of Medicine researcher Susan Nagel, PhD, explained,

“Regarding endocrine disruptors, we’re particularly concerned with exposures to pregnant women and young children because they are developing.  And we know from studies both in the lab and from people that these types of chemicals can alter permanently the developmental course.  They can lead to disease in adulthood.  We’re very concerned with exposure to young, developing individuals.”

Nagel is Assistant Professor of Obstetrics, Gynecology and Women’s Health at MU School of Medicine.

We might assume that as long as we don’t live near industrial areas, we don’t have to worry about toxic chemicals, but that’s not the case at all.  As mother and moviestar Jennifer Beals eloquently said on behalf of all parents during the Safer Chemicals, Healthy Families stroller brigade I attended in Washington, protecting our kids can be as commonplace as a trip to the store.

SCHF is a coalition of hundreds of organizations and millions of people concerned about everything from lead creeping back into costume jewelry to toxic flame retardants in our furniture to triclosan in our toothpaste and more.

The science of what goes into products is so complicated that even toxicologists don’t examine chemical safety the same way as endocrinologists. Those who study the endocrine system are discovering low-dose effects of chemicals may create more long-term risk than the science or medical communities ever imagined.  Award-winning researcher Frederick vom Saal, PhD, who serves as MU Curators’ Professor at the Division of Biological Sciences told me about still ubiquitous Bisphenol-A,

“Just for BPA, we have about a thousand papers now showing this is an endocrine disrupting chemical. It causes all kinds of harm.  If you wanted a designer bioterrorist chemical, this is what you would make; and it’s being sold by chemical companies, and people are being told it’s safe.”

Vom Saal went on to explain that even BPA replacement chemicals are not required to be proven safe before they go into the US marketplace.

Look no farther than your local kiddie fragrance counter to potentially find more hormone disrupting chemicals.  I can understand why some parents might think it trivial that I asked two children’s stores why they’re marketing perfume to young girls.  Yet, when it comes to toxic, even unlisted ingredients on consumer products, stores seem to be targeting the most vulnerable among us with products they can’t assure us are safe in the long-term.  If parents don’t speak up about this, who will?

While consumer products are largely unregulated for long-term safety, pesticides fall into their own regulatory category, still falling short of what an informed parent might consider safe.  The federal government already knows pesticides can be detected in human breastmilk.  The President’s Cancer Panel has already cautioned about pesticide risks to health.  The easiest-to-understand concept in the popular movement to label genetically modified foods in the United States is that GM foods potentially mean more pesticide exposures than ever before.

How do we create a baby-safe world amid the chaos that is our planet polluted with everything from hateful violence to plastic garbage patches in the ocean to toxic pesticides in breastmilk?  There is no easy answer.  Here are a few ways to get started:

1) Care about preserving our home planet.  Tap into the volumes of research already reported by astute scientists at places like the National Science Foundation and NASA.  If you’re still uncomfortable with the term “climate change,” focus on another concept we can all relate to like water quality or disaster preparedness or Creation stewardship.  If you’re convinced Jesus Christ will return before humans could possibly destroy the earth (I’m not arguing that he’s not), please consider whether you’d want Jesus to find you trashing the planet or loving your neighbor by preserving the few untarnished natural resources we still have left.

2) Think before you shop.  Use these FREE Healthy Child Healthy World resources and share them with other parents, teachers and anyone who might want to make wiser consumer choices.  Often when you make more eco-friendly choices, you’re improving your children’s home environment at the same time.  A frugal approach to more baby-safe shopping is to simply buy fewer products, which allows you to focus on quality.

One of the most hopeful stories I’ve had the privilege of covering lately originates in a farm field outside a Pennsylvania hospital.  Medical professionals have partnered with the nation’s leading experts in organic farming at Rodale Institute because they’ve decided it’s of utmost importance to provide patients with fresh, organic food. These same agricultural pioneers also say this farming method holds potential to solve climate change.  What an encouraging message for a new parent welcoming a baby into the world at that nearby hospital!

Anyone who’s ever raised a child can tell new parents we can’t protect our babies from every scrape with life. Letting them get a few scratches on their own is even part of the growing process.  Unfair as it is, not all children come into a home with the resources they need to thrive into adulthood.  Creating a baby-safe world calls for individual choices as well as collective action to say all our children deserve a safer, healthier future.

Enter your original post on “creating a baby-safe world” in Healthy Child Healthy World’s Blogger of the Year Contest that ends this week.

Saturdays in the Garden: Hot Enough for Lemon Trees Beyond the Tropics?
Riverkeeper Shares Clean Water Concerns about Fracking with Women’s Voices for the Earth