She hit the notes clear as a bell, solo, a cappella, truly “in the manner of the church” for her Sunday audience.  As my young daughter wowed the crowd during worship, I heard in her my own mother’s voice from years ago.  What a gift she handed down to the grandchildren she never knew!  So goes the bittersweet time leading up to Mother’s Day for our household.  We’ll send flowers to my sweet mother-in-law, and I’ll receive some handmade cards from my girls.  Then, I’ll try not to let them see my sadness although cancer stole my mom away too soon.

Daughterhood and motherhood may be only part of our individual identities, but they are lasting influences.  These relationships shape our lives and can hopefully motivate us for good.  I reflect that had cancer not affected my family this way, I probably wouldn’t have educated myself as thoroughly about healthy lifestyles, cancer prevention and parenthood.  Had I not become a parent, I would not have cared as deeply about giving children a healthy start in life and the encouragement to find their own voices. 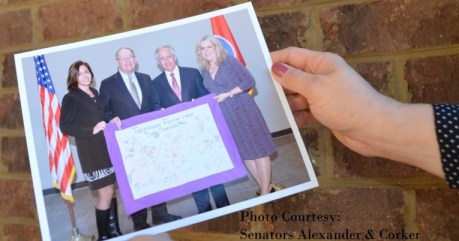 These influences motivated me to stitch together the simple quilt signed by many East Tennessee women and men who also care about a healthy future, that I hand delivered to our US Senator Lamar Alexander’s office in Washington last fall. As his constituent, I’ve implored Senator Alexander for some time now to be a champion for our children’s health and help us get some real reform on safer chemicals legislation.  Current legislation in Congress, although bipartisan and including Alexander in name, has unfortunately devolved into a sort of phony reform that would not protect women and children but would even dare to roll back states’ rights to protect their citizens. 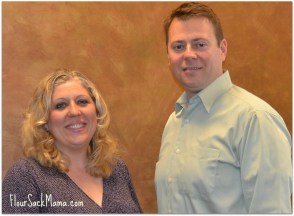 Meeting Candidate Terry Adams
Challenger for US Senate from Tennessee

For the first time in recent Tennessee history, a competitive Senate race is shaping up, with Alexander facing a viable challenge from Knoxville businessman Terry Adams.  Just like I’ve appealed to Alexander on multiple occasions, I’ve shared my concerns with Adams in hopes that our children can find a champion in getting real reform on safer chemicals legislation. This is such a mainstream, nonpartisan issue supported by voters of all sorts, I’m puzzled that more candidates for office aren’t talking about it.  As always, I’m willing to share educational information about the need for safer chemicals reform with anyone who’ll listen.

Why would a mother be speaking up for safer chemicals?  Because the latest science and health information points to environmental and lifestyle factors being about 90% of the reason (only 10% genetics) why so many of our loved ones are getting cancer. Pediatricians up-to-date on the research know chronic diseases in our children today are at unprecedented levels, with disorders like autism and other learning disabilities becoming commonplace.  This is not acceptable, especially since peer-reviewed science indicates toxic chemicals, common in our everyday environments, are suspected of causing all sorts of health problems.  The peer-reviewed research can even be narrowed down to a list of Hazardous 100+ well-documented toxic offenders.

Many moms like me have been asking the nation’s top retailers to Mind the Store and help clean up the supply chain of the worst toxic chemicals in consumer products.  Most recently, we’re asking Walgreens to follow the lead of some other big retailers like Walmart and Target in becoming more accountable for the products they sell.  But this still doesn’t get to the root of the problem:  our children are exposed, unwillingly, to a mix of toxic chemicals every day that have not been proven safe before going into commerce.  Our children are especially vulnerable before they’re even born.  Current US law does not require the level of product safety you or I might assume exists.

Instead of just wishing each other a Happy Mother’s Day, how about a healthier, more hopeful Mother’s Day? My lone voice as a mother may not be very powerful.  You may feel that way about yours, too.  Yet as a chorus, our diverse voices are heard.  If you feel inspired to raise your voice, you can click here to take action with Safer Chemicals, Healthy Families.  And please remember to ask all of those hand-shaking, baby-kissing candidates who want your vote whether they stand for phony reform or real reform on safer chemicals legislation.