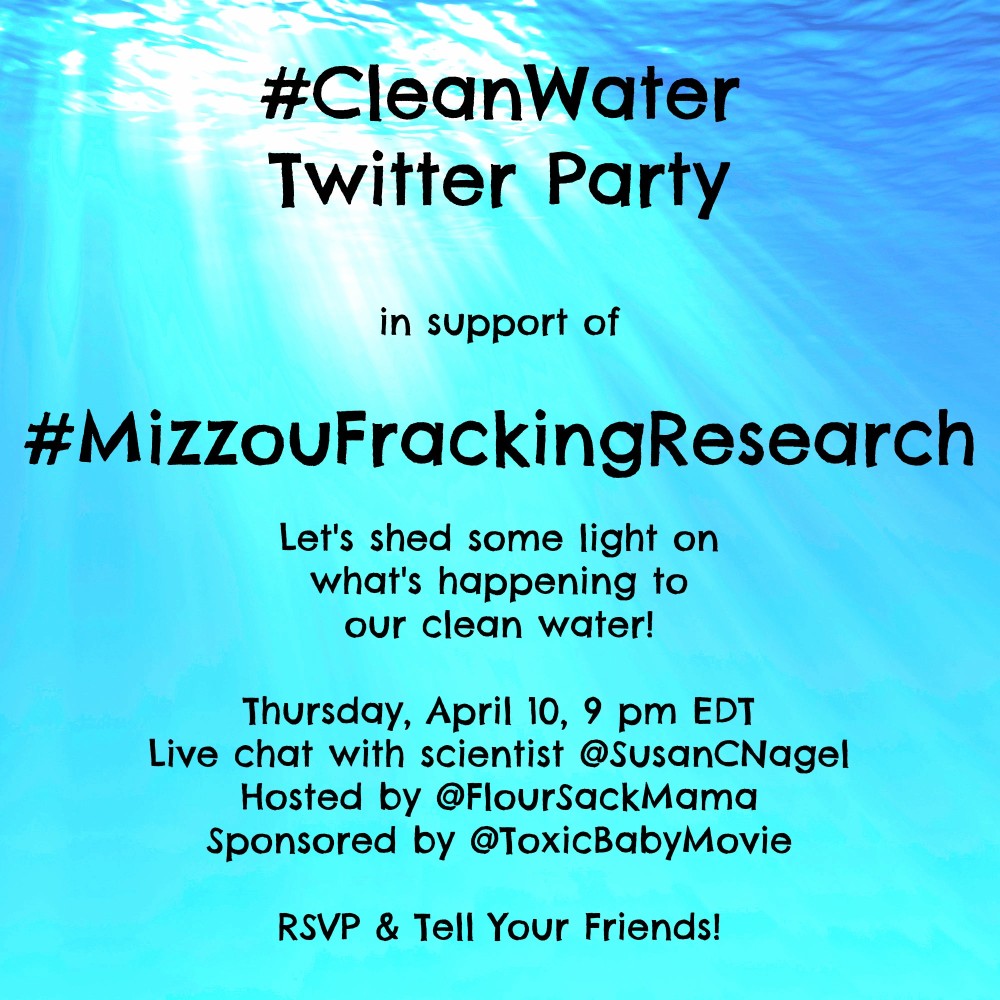 Maybe you’ve heard the expression “something’s in the water” mentioned in a lighthearted way.  We say it to explain a seemingly harmless but mysterious idea like why several of our friends are having baby showers all at once.  What if something in the water could seriously lead to fertility problems, birth defects and other health problems?  Wouldn’t you want to know?  Aren’t there ways to prevent this from happening in the first place?

Let’s shed some light on what’s happening to our clean water with a #CleanWater Twitter party in support of #MizzouFrackingResearch. This April 10 event is set for 8 pm Central, 9 Eastern on Twitter, hosted by @FlourSackMama and sponsored by @ToxicBabyMovie, with several interested panelists. YOU are invited!

Our special guest for the Twitter party is researcher Susan Nagel, PhD, the esteemed Associate Professor of Obstetrics, Gynecology and Women’s Health at the University of Missouri School of Medicine.  Nagel @SusanCNagel is a leading researcher on endocrine disrupting chemicals that can fool our bodies’ natural systems into malfunctioning, leading to all sorts of health problems.  Turns out, modern hydraulic fracturing for natural gas uses more than 100 known or suspected endocrine disruptors.

In a study published recently in the journal Endocrinology, Nagel’s research team led by graduate researcher Christopher Kassotis, found data suggesting elevated EDC activity in water near fracking sites in Colorado.  They also tested a dozen chemicals used in fracking to find the first recorded evidence of endocrine disrupting activity in those chemicals.

Now, it’s time for a second phase of research to answer the question “does fracking contaminate water with hormone disrupting chemicals?”  The Nagel team has started a crowdfunding effort to raise enough funds to promptly gather more research data, enough to convince the National Institutes of Health to back an even more substantial research study.

This Twitter party is an effort to help spread the word about #MizzouFrackingResearch so this research can help protect the health of future generations.  For those of us who are already or want to become parents someday, this question researchers are asking is not an abstraction.  If fracking is putting EDCs into our waters, the widespread nature of fracking means the health of many people would already be at risk.

Join in by following all of the Twitter party participants and RSVP to add your Twitter handle (name) below:

@SusanCNagel   our special guest and esteemed scientist at the University of Missouri!

@ToxicBabyMovie  our Twitter party sponsor that is creating an innovative app for parents about environmental chemical exposures!

@Ginabad blogger who encourages other parents with special needs children

@AndreaDonsky  registered holistic nutritionist who writes about health and wellness

Here’s a suggested Tweet you can use to tell your friends about the event:

3 Responses to #CleanWater Twitter Party in support of #MizzouFrackingResearch