The Environmental Protection Agency is taking long-awaited steps to determine the safest way of dealing with coal ash waste from United States power plants.  More than 136 million tons of the stuff is produced each year in the US per government estimates.  The EPA has responded to a coalition of environmental watchdogs by agreeing to finalize rules in December 2014 for disposing of the toxic waste.

The enormity of America’s coal ash disposal challenge came to bear in 2008 when the Tennessee Valley Authority’s storage facility failed, flooding 300 acres of East Tennessee, polluted public waterways and destroyed homes.  Earthjustice brought a lawsuit on behalf of Appalachian Voices, Sierra Club, Southern Alliance for Clean Energy and others compelling the EPA to do something about it. Coal ash is being disposed of in both liquid and solid forms and enjoys generous loopholes from environmental protection laws. 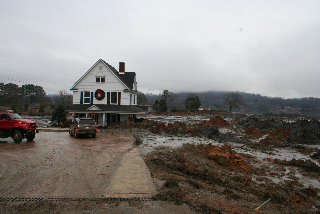 Coal ash is a byproduct of burning coal in power plants. Some is currently accepted as a building material in the nation’s highways, where it can become sealed into a new road. But other uses of unencapsulated coal ash in construction and agriculture are being questioned. An ongoing conversation has been taking place about ways to safely store the fossil fuel byproduct.   Physicians and scientists note that coal ash contains heavy metals like lead, arsenic and mercury, and that public waters are at risk from unsafe disposal and leaching of these chemicals.

“Having a date certain for a final rule is welcome news, but proper oversight of toxic coal ash was needed decades ago,” said Ulla Reeves of the Southern Alliance for Clean Energy. “We have so many billions of gallons of toxic coal ash waste across the Southeast it could cover 275,000 football fields one foot deep.  EPA must rise to the occasion and finalize a rule that will truly protect our people and waters of the region.”

You can read more from Earthjustice about the historic move to look at coal ash rules.

See details from the EPA about coal ash at the agency’s website.

Learn more here about the Southern Alliance for Clean Energy.