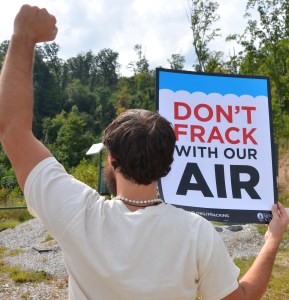 Hydraulic fracturing for natural gas, commonly known as fracking, continues to be a point of concern for residents across the United States, including in Tennessee.  This article about citizen concerns first ran September 16, 2013.  There has been an unusually high amount of interest in this article, so here is another look at it.

Stickers call to Protect Our Future on educational materials used by participants on a weekend Fractivist Conference in Knoxville, Tennessee.  Concerned citizens and instructors gathered from more than a dozen states and as far away as Australia with common concerns about protecting public health and the environment.

Knoxville area Sierra Club member Axel Ringe said concern about fracking, the common term used for hydraulic fracturing, is “the long-term concerns for the health and vitality of communities.”  The retired scientific analyst for the Department of Energy said fracking poses too many unknowns about threats to air quality, disposal of wastewater, potential well water contamination and even declining property values.  Although  a version of the drilling has been used for years in oil and natural gas exploration, the newest methods that can extract natural gas from previously untouched layers of rock are raising critical concerns. 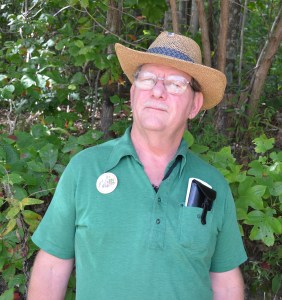 Morgan County, Tennessee resident Terry Brewster said he can’t drink his well water anymore now that  a fracking site has gone in on some neighboring property. “It’s got an oily film on top of it,” Brewster said, and he describes the color as sometimes pinkish and rust-like. He goes elsewhere to collect artesian or bottled water that he feels comfortable drinking. Brewster was not aware of any public notice before the fracking began, only a rude awaking, “In the middle of the night I kept waking up to a grinding noise that I couldn’t identify.”

With thousands of oil and gas wells in Tennessee alone and no user-friendly database or notification for citizens, several watchdog groups are doing what they can to inform the public.  What if you suspect a problem with an oil or gas well in your area? You may find an industry phone number on the site.  But Mountain Justice volunteer Matt Landon suggests calling 911 or the local fire department, plus reporting problems to the Tennessee Department of Environment and Conservation. 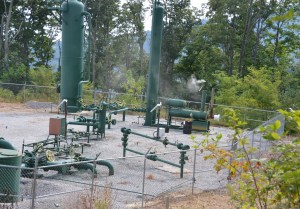 After a recent citizen and media educational tour of a few publicly visible industrial sites, Landon said he’ll be reporting several suspected safety violations.  Since the entire state of Tennessee has as few as 3 or 4 inspectors for thousands of oil and gas wells, finding safety violations often falls to citizens and watchdog groups.  On a tour during the Fracktivist Conference, a stop near the Lake City Compressor Station revealed a sickening stench in the air.  This is a short drive up Vowell Mountain from tiny Lake City and a few more miles north of bustling Clinton, Tennessee.  Said Landon, “Citizens have a right to keep companies in check and protect the environment.” 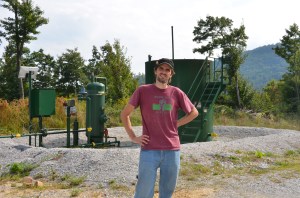 Recent news that the state of Tennessee has not moved forward with immediate plans to allow fracking on public lands was received with some relief by concerned citizens. Tennessee Sierra Club’s Conservation Chair Scott Banbury commented, “We think it’s a good precedent that they’re backing off.”  But Banbury and others also understand it may be temporary economics that have slowed the process as much as a petition from thousands of concerned citizens.  In addition to a ban on public lands, the Sierra Club wants to see more long-term health and environmental safety studies to show that fracking can be done at all without causing harm.  In a prepared statement, Dean of the University of Tennessee’s Ag Research department Bill Brown said about putting an oil and gas research project on the Cumberland Plateau on hold, “We continue to hear concerns from the public about the environmental impacts of gas and oil extraction. We’re looking forward to continued work with our stakeholders regarding possibilities of moving the project forward.”

Elizabeth Barger wants to continue being able to drink the well water at her farm in the Chattanooga Shale area, even though that rock formation is being eyed for its oil and gas resources.  She has grave concerns about long-term health if fracking advances in her home state; and she values clean drinking water more than any financial opportunities that might come her way.  Said Barger wryly, “You can’t drink oil and you can’t eat money.”

*More here about the Fracktivist Conference and the 19 different groups involved in organizing it.