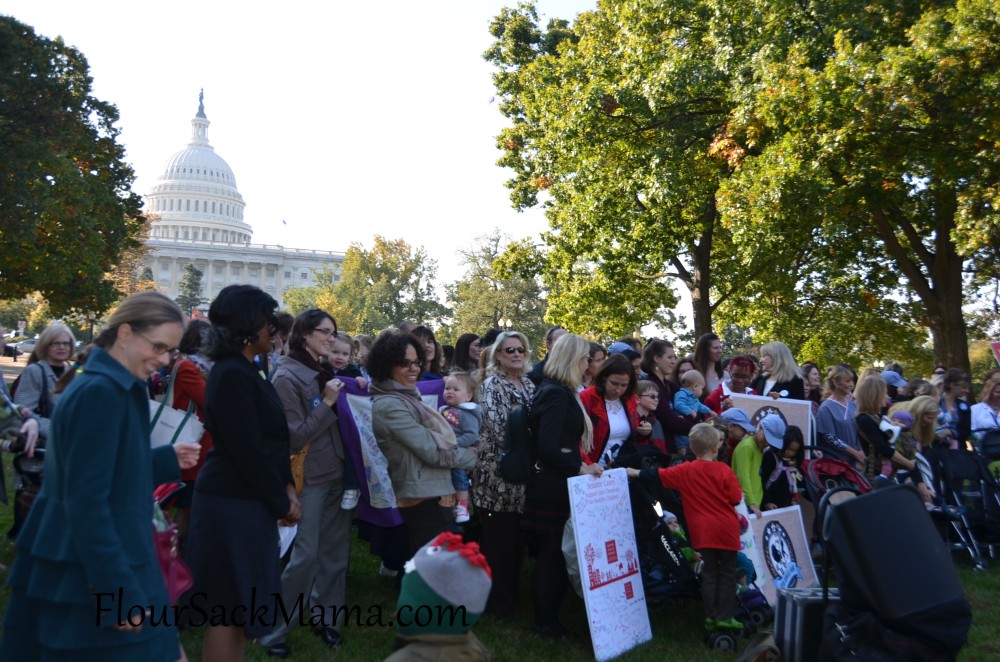 Hopeful moms, playful kids and strollers descended recently on cynical, dark-suited Washington, DC along with medical experts like environmental health researchers and leading doctors.  They aimed to bring the message from outside the beltway that parents and pediatricians are especially fed up with a lack of health-based chemical policies to protect our nation’s children.  The Safer Chemicals Stroller Brigade attracted hundreds of people for a rally outside the Capitol building, even before they all knew a Hollywood mom would be among the guest speakers. 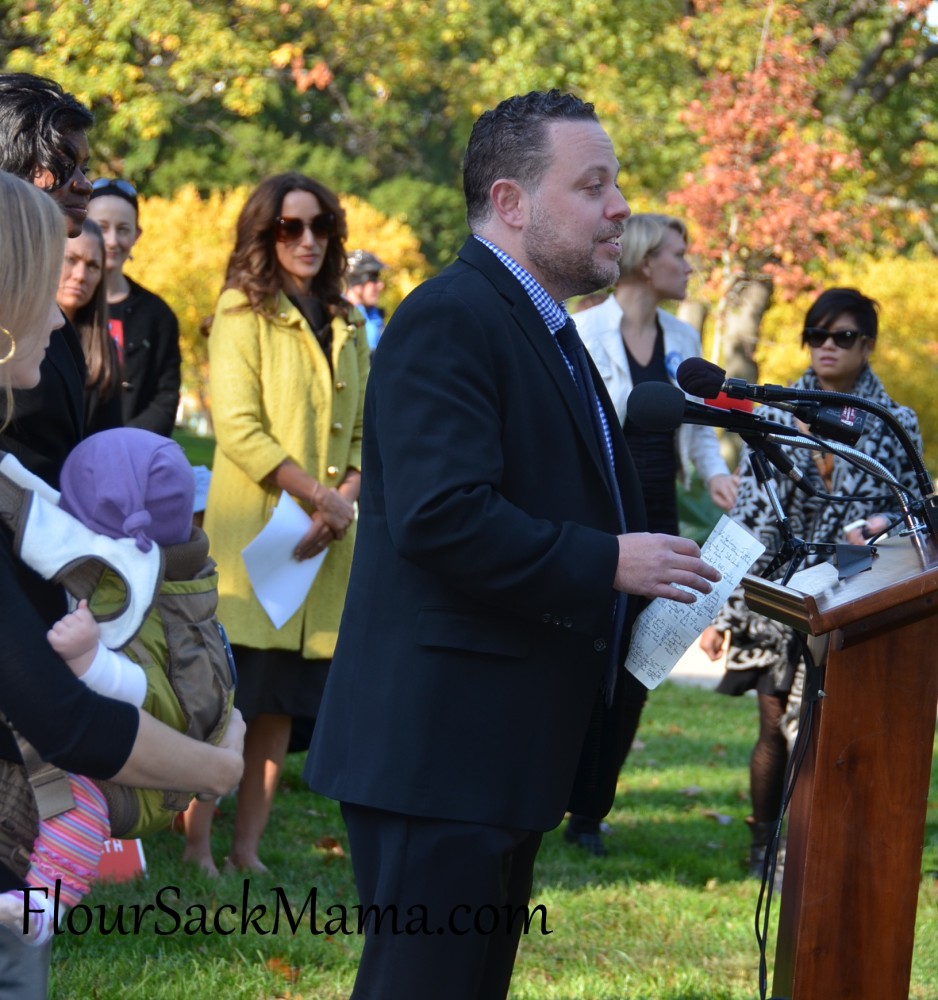 Safer Chemicals, Healthy Families Director Andy Igrejas represented 450 different organizations and millions of ordinary Americans when he told the crowd and the television cameras, “In the real world, the doctors and the moms are winning, the real world outside of Washington, where informed mom activism has already convinced the marketplace to change,  with major announcements in the last couple of weeks from Walmart and from Target to restrict the toxic chemicals in the products that they sell. And really Congress is almost the last holdout in the entire country that hasn’t gotten the message of the need to restrict toxic chemicals.” 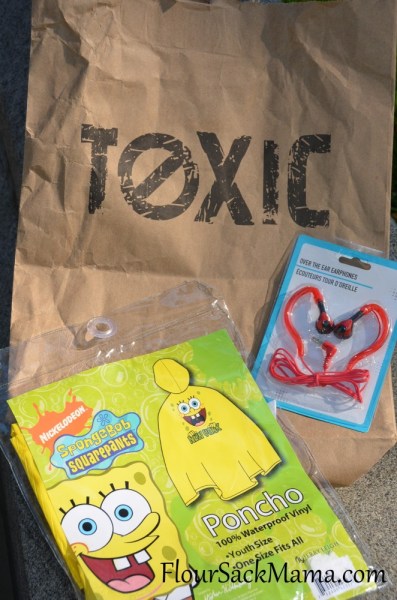 HealthyStuff.org and CHEJ.org found elevated levels of phthalates in these consumer products

The movement is grounded in the latest scientific research, flanked by the medical community and fueled by concerned parents.  It goes beyond the call for clean air and water that is already expected in the United States, to the unseen but ubiquitous amount of toxic chemicals in everyday products we buy for our homes.  New results were released at the Stroller Brigade by the Center for Health, Environment and Justice and HealthyStuff.org about high levels of phthalates found in yet another round of products they’ve independently tested. Scientists found suspicious levels of hormone-disrupting plasticizers  in vinyl flooring, dumbbells, earbuds and even a child’s Sponge Bob poncho. The message appears to be that despite response by some retailers to eventually become more responsible, US citizens today cannot count on their products to be safe. 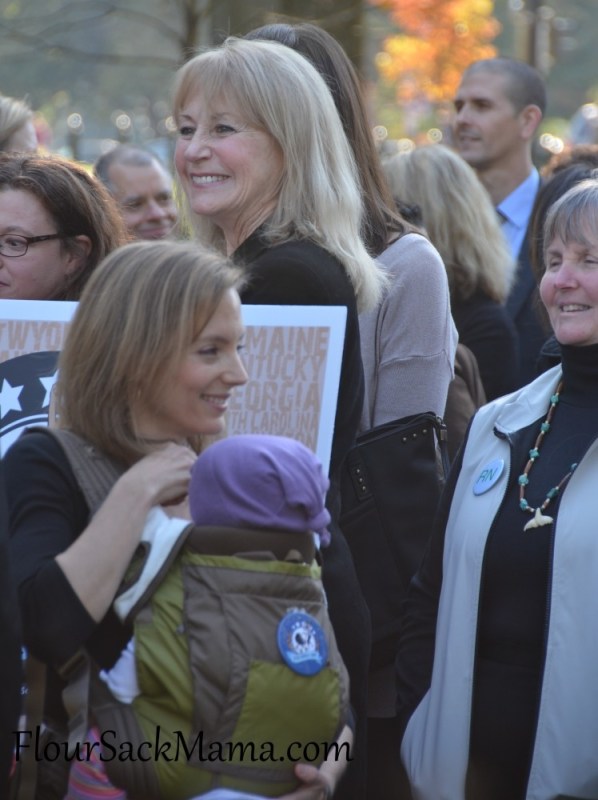 Sarah Cieffo of the League of Conservation Voters waits to speak at Stroller Brigade for Safer Chemicals, Healthy Families

Actor and Yale graduate Jennifer Beals humbly stood alongside other concerned parents, and spoke her mind about our common concerns.   “I am a mother, and I am tired of feeling like I have to have a PhD in toxicology in order to be a competent parent.   I am tired of being a detective hunting the internet for clues as to what product is safe and what product is not safe and why.  I am tired of trying to shop my way around this problem, deeply aware that not everyone is able to do so.” 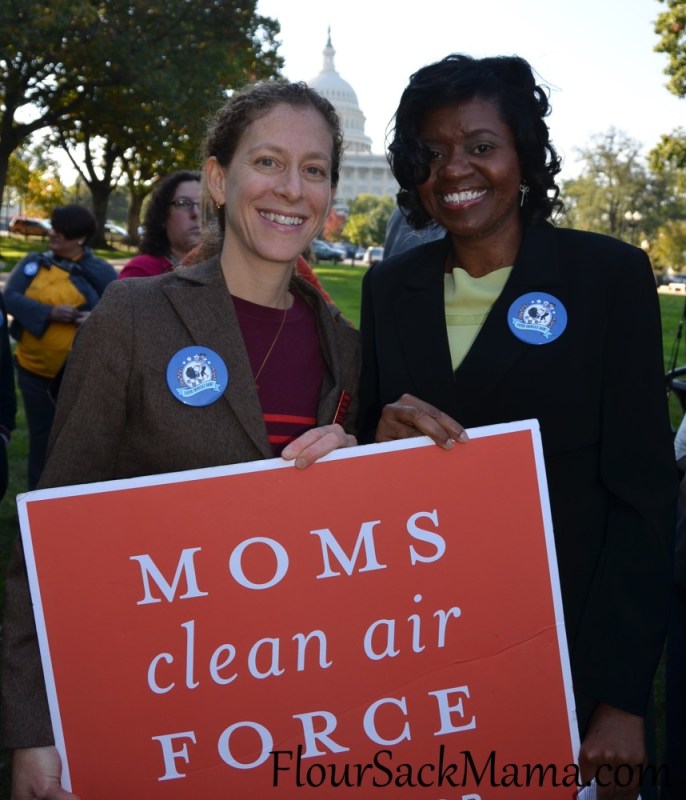 Sarah Chieffo wore 6-month-old Stella when she shared her personal concerns.  Chieffo is with the League of Conservation Voters.  “Even being a somewhat informed consumer I simply couldn’t shop my way around this problem. Dangerous chemicals are all around us.  They’re in our couches, they’re in our carpets, they’re in our electronics, they’re even in the receipt I get from the grocery store.  It’s simply unacceptable that the exposure I suffered when pregnant could have harmed my baby before I even heard her first cry.”

The exposures to children in the womb are what informed Americans find particularly disturbing.  Much of the research comes from the government’s own body burden studies. Pediatrician Dr. Yolanda Whyte from Atlanta told the crowd, “Babies are exposed to toxic chemicals as they are developing in the womb…There’s a well-established body of research that shows cause for concern.”  Dr. Whyte went on to explain that even small doses, over time, can add up to serious health consequences for our children.  “If we can prevent exposures to toxic chemicals, then we must do it.”

Igrejas stressed that Congress needs to hear the call for real reform on toxic chemicals, which means strengthening currently proposed legislation.  “It’s worth noting that science and medicine are on our side.  Every mainstream organization of doctors and scientists has concluded that unregulated chemicals contribute to the burden of illness and disease in this country. They’ve also largely agreed on what it means to protect the public from chemicals, what kinds of policies, what kinds of standards you need. Unfortunately we don’t see their recommendations, those standards, in the legislation before Congress. We’re here to insist that that change.  We’re here to insist that the legislation before Congress be changed to meaningfully protect public health from toxic chemicals. It’s important that Congress gets this done.  But it’s even more important that they get it done right!” 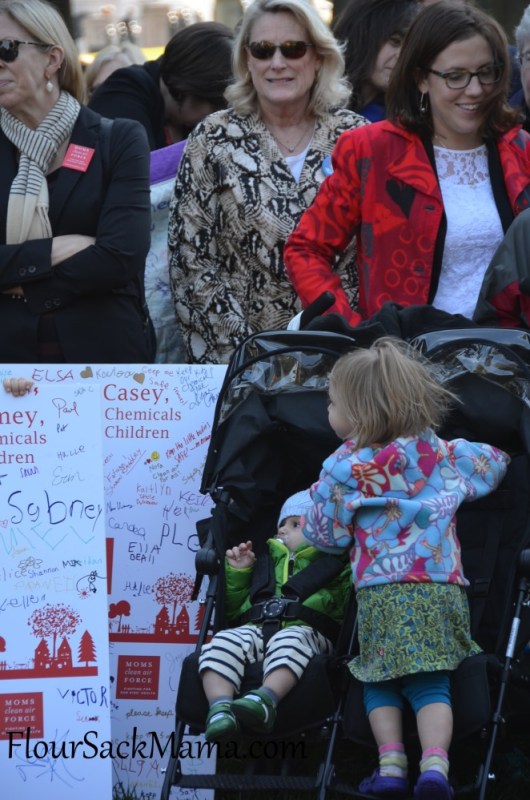 SCHF says meaningful reform would protect pregnant women, children and the most vulnerable populations while preserving states’ rights and allowing the Environmental Protection Agency to do an effective job.  Some language in the current bipartisan bill would potentially do more harm than good if not corrected.

Stroller Brigade participants with health concerns in common came from dozens of different states and diverse backgrounds. They  included cancer survivors, learning disability experts and mothers who’ve lost children. They embraced the idea of a nonpartisan approach to reform that goes beyond a beltway fix to something that helps all Americans.  SCHF made the trip possible for this stay-at-home, work-from-home mom.

While Beals’ glamour and perfectly enunciated words got the media’s attention, she spoke eloquently for every mom in America, “I am tired of having chemical companies’ untested concoctions run through my veins uninvited.  Dow, Dupont, Exxon Mobile, you are not invited to take up residence in my DNA. Let this serve as an eviction notice.  We are all tired of you barging into our sacred homes, our bodies and the bodies of our children.”

You can tell Congress your personal reason for wanting safer chemical policy here.

Also:  our exclusive interview with a top pediatrician concerned about your kids!

Later this week:  meet more moms advocating for a healthier future for our children.