The president of the American Academy of Pediatrics has said it very clearly.  “The linkage between chemical exposure and cancer, developmental disabilities, asthma and other health conditions is well-established.  Yet, Congress has been unable to approve meaningful TSCA reform since 1976,” wrote AAP President and medical doctor Thomas McInerny in a letter this summer to a politician that clarified the AAP’s position.  McInerny stressed that while the AAP that represents 60,000 pediatricians is calling for meaningful environmental health protections for children, it has not specifically endorsed the proposed Chemical Safety Improvement Act because that Congressional measure needs to be stronger. Popular pediatrician Dr. Alan Greene understands that parents can feel overwhelmed by hearing that the United States’ chemical safety system is outdated and that more than 80,000 chemicals in commerce are virtually untested for long-term safety.  Dr. Greene suggests we can focus on a few things we can do for our children today:  be mindful about what goes into their mouths, on their skin and into the air they breathe.  For all of the concerns we can have about industrial air pollution, Greene reminds parents that the air inside our own homes is often our biggest source of air pollution — so open a window from time to time!  Greene also says removing our shoes at the door can prevent us from tracking in numerous toxins from elsewhere. 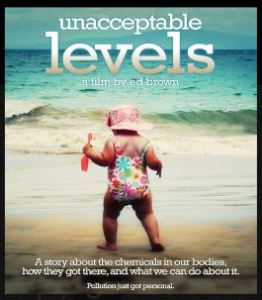 One of the most common arguments against reforming chemical safety is that tiny, trace amounts surely couldn’t harm anyone.  Greene noted the example that prescription medicines work by using tiny, trace amounts and that chemicals in our environment are able to affect us in the same way.  “We’ve proven it with mercury,” and with some other environmental toxins, Greene explained.

In Unacceptable Levels, which FlourSackMama.com was given access to preview, Brown and his wife are sharing their lives as a typical family with some increasingly common health concerns.  Brown seeks information from some of the nation’s leading environmental health and science experts to help explain “chemicals in our bodies…and how they got there.”

While Brown is clear about his point of view, the film is a sincere attempt to explore and educate about toxic chemicals and their complex relationship to our lives.  It’s a must-see for families, especially dads, who might be wondering how everyday choices could affect their children’s future.

You can watch Unacceptable Levels this week in Los Angeles or Washington, DC, next week in Nashville, and elsewhere in a theater near you when you organize a local group for a screening.  More information at this link.