Nearly a decade of controversial hydraulic fracturing in the Fayetteville Shale formation of rural Arkansas has enriched some, outraged others and raised numerous questions about safety and sustainability.  Citizens north of Little Rock are still monitoring their own air quality and eyeing water quality because of suspected long-term impacts of the oil and gas industry.

We first told you about Arkansas mom April Lane and her family and neighbors this spring, when they were busy starting a citizens’ bucket brigade using special air monitoring equipment.  Then, it added insult to injury when the tiny community of Mayflower became home to an unprecedented oil pipeline rupture that dislocated some residents and raised further health concerns.  Lane and others have stayed involved in citizens’ town hall meetings and other communications to help residents understand the full impact of the disasters. 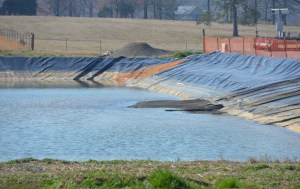 Lane is still training others to monitor what’s happening with their air and water and to be vigilant about protecting a healthy way of life in rural Arkansas. Her sister-in-law Emily Lane has begun screenings of Land of Opportunity, a film that documents some of the residents’ struggles.  Concerned citizens are still questioning why treated fracking fluid that contained a mysterious cocktail of toxic chemicals would be allowed by the state to pollute a public waterway.  That practice is the subject of a state-issued water discharge permit that is being contested.

While some government oversight is in place for industry, budget constraints alone often stretch safety inspectors until they can’t regularly visit many fracking sites.  Citizen groups like Arkansas Fracking and a local citizen’s advisory board are stepping in to monitor health and safety issues where government falls short.  “We’re hoping to supplement that lack of involvement,” said Lane.